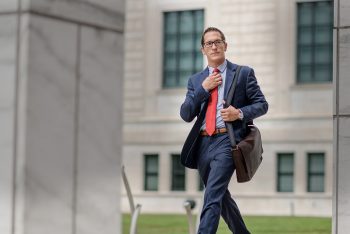 Life Lessons Learned Along the Way: Don’t Judge a Book by its Cover

If my name doesn’t sound familiar to you it is because I am the new guy in the Group. And if you didn’t realize I was the new guy based on the lack of name recognition, it should have been apparent because I mistakenly volunteered to write this article after Harvey stole the show last month like a knight in shining armor (talk about a tough act to follow). Heroics aside, my life lesson is not to judge a book by its cover.

To cut to the chase, I am exactly one minute older (and a little bit taller) than my identical twin brother. There are a few questions that people typically ask which I will answer to get out of the way: (1) we did not trade places to trick our teachers and (2) we do not know what the other is thinking. Despite not having telepathic abilities, we look very much the same. If he wore my clothes and I his, there are not many people that could tell who is who (my mother can tell us apart from more than a mile away, around the corner, and from behind).

I recently read that identical twins do not have the exact same DNA but it is essentially the same. Despite having an almost identical genetic makeup, anyone who has met us can tell you that our respective personalities are night and day. Even though we look the same on the outside, we are drastically dissimilar.

My parents understood this phenomenon early on. And, as a result, I like to think they learned not to judge a book by its cover. Every parent knows what works for one child may not work for the other. But it may be more difficult when the children look the exact same.

My mother loves to tell stories of us growing up. One of her favorites is the time that my father (who is not a handyman) spent hours putting child safety locks on all the cabinets. They may have worked in the past for my older sister. However, it was not going to work for the two of us. The story is told that by the time my father ran out of bandages and finished the last child safety lock, he looked over and saw one of us pulling open the cabinet and the other disengaging the lock.

Another story that specifically comes to mind is how my brother and I would approach new things. For example, when it came to riding bikes without training wheels, my brother jumped on his bike and rode off. I wanted to wait, watch him attempt to complete the new task, make sure it was safe to proceed, and then try it myself.

One of the best parts of being a twin is that you could always blame someone else if you weren’t caught red-handed. Hopefully my mother doesn’t read this but I was the one who peeled the corners of the freshly affixed wallpaper that was conveniently located within both of our reach.

Being a twin has taught me a lot and is a part of who I am. I am competitive, collaborative, and creative when it comes to shifting the blame. I’d like to think being a twin has helped make me a better lawyer. Beyond those specific traits, however, I have a deeply engrained appreciation not to judge a book by its cover. Even though something may look the same or similar, that’s not always the case. It is important to take a deep dive because there are likely differences that you may not understand or appreciate from an initial glance. As lawyers, we all benefit from not judging a book by its cover because even though our job may be to show how the case at bar is similar to a beneficial court opinion, we must take a step back, verify or alter initial analyses or interpretations and take the time to not judge a book by its cover.

In our second article, Jesse Roth provides insight into determining whether an entity is a joint employer under Title VII and potential liability for franchisors.