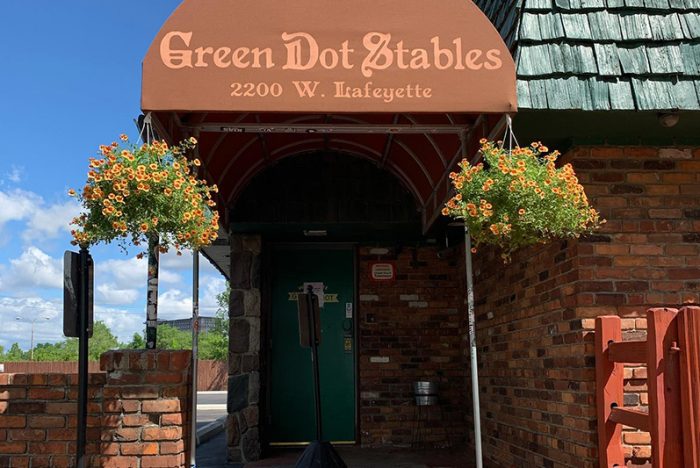 Southwest Detroit eatery Green Dot Stables has been a Corktown neighborhood institution since it opened in 2012. Owner Jacques Driscoll and head chef Jordan Clayton never anticipated a David-versus-Goliath lawsuit with the Detroit International Bridge Company (DIBC) over the restaurant’s parking lot, even when questions arose about the title to the land.

The gloves came off on August 31, 2021, when the DIBC erected a seven-foot chain-link fence over a sliver of the lot it claimed it owned, blocking access to more than a dozen customer parking spots and a trash Dumpster.

Until then, the parties had attempted to resolve the ownership dispute cordially, outside the courtroom. When talks broke down, DIBC put up the fence, prompting Green Dot’s lawyer, Maddin Hauser Shareholder Michelle Harrell, to seek an emergency court hearing. According to an order from Wayne County Circuit Judge Muriel Hughes, the company removed the barrier on September 2 but ultimately gave the parties two weeks to resolve their differences.

On September 17, 2021, Michelle told the court the two sides had reached an agreement, effective immediately. Under the settlement, Green Dot will purchase the parcel in question for $90,000, obtaining a deed to the land. The DIBC will have the right of first refusal to match the terms of anyone proposing to purchase the restaurant and the property from Mr. Driscoll; that right lasts seven days and expires automatically if not exercised.

Had the parties not resolved the dispute, Michell and her client were prepared to argue that the Green Dot and previous owners of the restaurant used the property for some 50 years with no issues or objections, giving rise to a viable squatter’s rights claim.