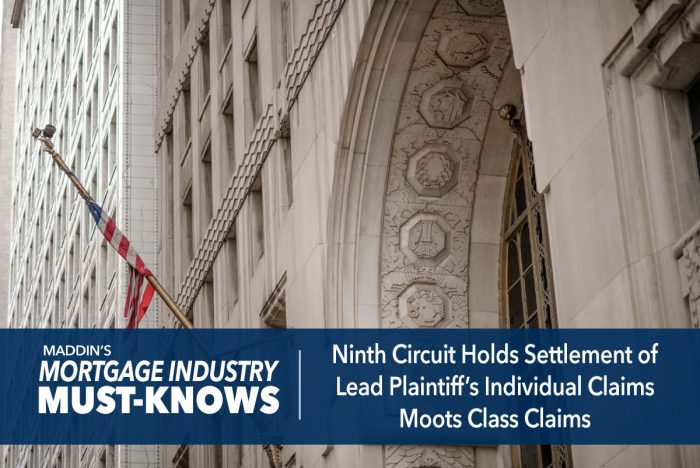 A hot button issue in class action litigation remains whether a lead plaintiff in a class action brought in federal court can continue to prosecute class claims after voluntarily resolving his individual claims. The Ninth Circuit resolved some uncertainty yesterday by holding that class minimum wage and meal break violation claims against AutoZone did not survive the lead plaintiff’s settlement of individual claims because he did not maintain a “financial stake” in the class claims. See Brady v AutoZone Stores, Inc. (Opinion www.law360.com/articles/1279718/attachments/0).

Plaintiff Michael Brady sued AutoZone in federal court seeking damages, individually and on behalf of a putative class, for alleged violations of Washington’s meal break laws. The district court denied Brady’s motion for class certification under Federal Rule of Civil Procedure 23. Brady subsequently entered into a settlement agreement with AutoZone. The agreement resolved his individual claims and all “claims to costs or attorneys’ fees” for $5,000 and specifically excluded the class claims from the release.

The district court entered a final judgment and Brady appealed the denial of his motion for class certification. On appeal, AutoZone argued Brady had no financial stake in the class claims; Brady argued he maintained a financial stake because of a legal obligation to pay certain costs incurred in the case and a right to a service award for acting as the class representative if the class were certified.

The decision certainly brings closure to an open issue in the Ninth Circuit. More importantly, however, it reinforces the care with which companies must settle a class action on an individual basis to ensure the entire litigation with that plaintiff, including the class claims, are resolved. That care includes knowing in advance of the settlement whether the case law in your Circuit allows you to moot the class claims through an individual settlement and, if so, on what terms.