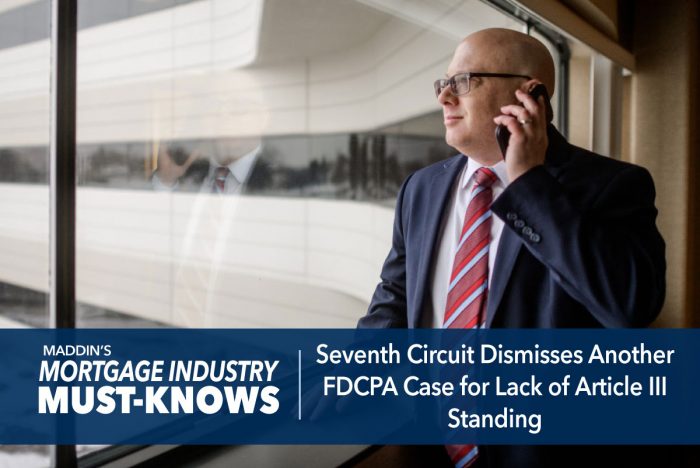 Smith claimed the letter violated Section 1692g(a)(3) by making her believe that disputes had to be in writing when that section of the FDCPA does not require disputes to be in writing. Smith’s confusion, however, did not result in her being worse off than if the letter had told her she could dispute the debt orally. For example, she did not allege that: (i) she paid money she did not owe; (ii) she would have disputed the debt if she would have known it could be done orally; or (iii) she doubted that she owed the money to the creditor.

Instead of deciding the merits of the legal claim for the first time, the 7th Circuit affirmed the lower court’s dismissal for lack of standing to sue. As it did in Casillas v. Madison Avenue Associates, Inc., 926 F.3d 329,331 (7th Cir. 2019), another lack of standing case under the same section of the FDCPA, the Seventh Circuit found “no harm, no foul.” In other words, Smith had not alleged an injury because she had not shown “what good a dispute would have done her.” Absent from the complaint were allegations that the debt collector was collecting from the wrong person or collecting the wrong amount, and she acknowledged in her declaration in the district court that she had not decided whether she intended to dispute the debt. The lack of these allegations and her admission resulted in the 7th Circuit affirming the dismissal for lack of standing, but simultaneously warning litigants that it was not holding that a plaintiff claiming a violation of Section 1692g(a)(3) can never establish Article III standing.

Smith is instructive for two reasons. First, depending on a plaintiff’s theory and the allegations in the complaint, it’s another “tool” in the “toolbox” to dismiss FDCPA claims when your client’s validation notice strays from the text required by the FDCPA. Second, it reinforces the relevance of the actual debtor’s reaction or inaction to a collection notice when challenging whether there is a personal (subjective) injury sufficient for standing, as opposed to its lack of relevance when arguing whether a collection notice was misleading to the objective unsophisticated/least sophisticated consumer.