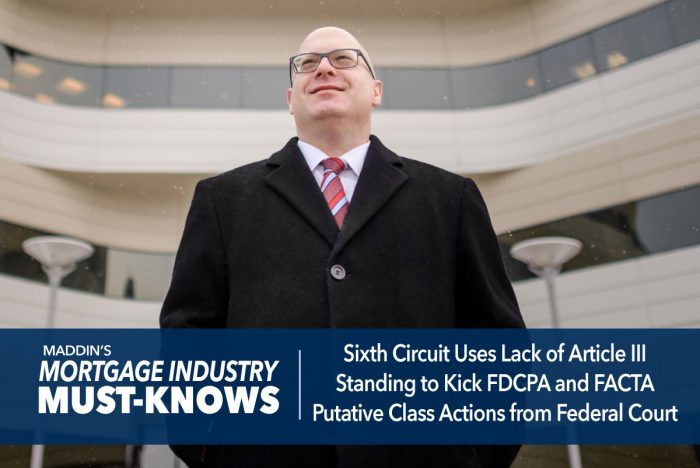 Lack of subject matter jurisdiction for no standing under Article III of the U.S. Constitution is alive and well in the U.S. Court of Appeals for the Sixth Circuit.  Although the Seventh Circuit received a lot of attention in late 2020 when it dismissed numerous cases filed under the Fair Debt Collection Practices Act (“FDCPA”) for failing to allege an injury in fact sufficient under Article III of the U.S. Constitution to remain in federal court, the Sixth Circuit recently used a lack of Article III standing to kick putative class actions claiming violations of the Fair and Accurate Credit Transactions Act of 2003 (“FACTA”) and the FDCPA from federal court.

The first case, Thomas v. TOMS King (Ohio), LLC, No. 20-3977, decided on May 11, 2021, involved a fast-food restaurant that printed credit card receipts containing the first six and last four digits of the credit card number in violation of FACTA’s restriction that only the last five digits be printed. The complaint alleged the following two injuries:  (i) the disclosure resulted in a significant risk of the very harm Congress intended to prevent in FACTA – the display of card information that could be exploited by an identity theft — and (ii) plaintiff (and class members) took additional steps to safeguard their identity by protecting the receipt from disclosure. The district court dismissed the complaint, without prejudice, finding it lacked subject matter jurisdiction because the plaintiff had not alleged a concrete injury because a threat of future harm was not “certainly impending” under Clapper v. Amnesty Int’l, USA, 568 U.S. 398, 410 (2013).

The Sixth Circuit affirmed the dismissal. First, it reiterated that the Supreme Court has held more than once that the injury in fact requirement under Article III is not automatically satisfied by a statutory violation; a plaintiff must still plead a concrete injury, whether it is actual harm or a risk of material harm to the plaintiff. Thomas, p. 6.  Second, it held that no injury in fact existed because: (i)  plaintiff did not allege she was the victim of identity theft, (ii)  the disclosure of the first six digits of a credit card, which reveal only the card issuer and card type, does not inevitably lead to or increase the risk of identity theft even if a bad actor manages to obtain the receipt and (iii)  if the hypothetical future harm of identity theft  is not “certainly impending” and is not a concrete injury then taking concrete steps to safeguard the receipt to protect against identify theft cannot be either.  Id., p. 13. Lastly, plaintiff’s comparison to common law claims of breach of confidence and invasion of privacy failed to provide justification for an intangible concrete injury arising from the procedural violation of FACTA because those two claims require a disclosure of the information to a third party and plaintiff had not alleged that the credit card numbers had actually been disclosed to a third party.  Id., pp. 14-15.

Approximately two weeks after that decision, the Sixth Circuit decided Garland v. Orlans, PC, No. 20-1527 (6th Cir. May 28, 2021). In Garland, the Court relied on Article III to dismiss a putative class action filed under the FDCPA and Michigan’s Regulation of Collections Practices Act (“RCPA”) claiming a lack of meaningful attorney involvement by a foreclosure law firm in sending a letter to the plaintiff.  The letter informed the plaintiff that the foreclosure process had begun but a foreclosure might be prevented if he contacted the lender. The district court dismissed the FDCPA claim for failure to state a claim and declined to exercise supplemental jurisdiction over the RCPA claim.

On appeal, the Sixth Circuit addressed only standing and found that no subject matter jurisdiction existed because no injury in fact under Article III was alleged in the complaint. The only alleged injuries pled in the complaint were the intangible harms of confusion over whether the letters had been reviewed by attorneys and general anxiety over receiving a letter from an attorney that could reduce the chance of avoiding foreclosure. Plaintiff did not allege the violations themselves presented a material risk of real harm to the interest Congress sought to protect in the FDCPA by prohibiting a debt collector from misrepresenting that a communication is from an attorney.

The Court quickly rejected any notion that confusion was concrete enough to be an injury in fact. In joining the Seventh Circuit (see Brunett v. Convergent Outsourcing, Inc., 982 F.3d 1067 (7th Cir. 2020)) in holding that “the state of confusion is not itself an injury”, the Court found that confusion bears no “close relationship to a harm that has traditionally been regarding as a providing a basis for a lawsuit” and nothing in the FDCPA or the RCPA was presented to it which shows that either Congress or the Michigan legislature had intended to make confusion actionable. Garland, p. 5.

The central issue in Garland was whether an allegation of general anxiety is a concrete injury.  In a prior case, Buchholz v. Meyer Njus Tanick, PA, 946 F.3d 855 (6th Cir. 2020), also involving a claim of lack of meaningful involvement under the FDCPA, the Court had expressed doubt that a “bare allegation of anxiety” could ever qualify as a concrete injury.  Buchholz, 846 F.3d at 863.  In Garland, the Court held it could not for three reasons.

First, general anxiety was not an intangible harm with a “close relationship to a harm that has traditionally been recognized as providing a basis for a lawsuit.”   Garland, p. 7, citing Spokeo, Inc. v. Robins, 136 S. Ct. 1540, 1549 (2016). It noted that the tort of intentional infliction of emotional distress applies only to a “very small slice of human behavior” where the conduct was extreme and outrageous and requires a showing of severe emotional distress and neither the defendant’s  conduct nor Garland’s claimed anxiety were analogous. Garland, pp. 7-8.

Second, Garland pointed to nothing in the FDCPA or the RCPA to suggest that the legislatures intended to make anxiety a cognizable harm in federal court.  In other words, that Congress prohibits debt collectors from falsely implying they are attorneys does not mean that Congress intended that someone who suffers general anxiety from such a claim could maintain a suit in federal court.

Third, because the letter threatened nothing and the claimed anxiety was merely a fear of future claim that was not “certainly impending”, the claimed general anxiety was too speculative to constitute an injury in fact under Clapper.  And, even if the general anxiety were sufficient to give rise to a concrete injury, the Court found that “the root” of the alleged anxiety was caused by the failure to pay the debt and was not fairly traceable to the defendant’s letter. Garland, pp. 9-10.

These two cases are good reminders that the lack of Article III standing remains a viable defense in federal district courts in the Sixth Circuit and on appeal to the Sixth Circuit regardless of the outcome in in the district court. Whether to raise the defense by motion in response to the complaint or later in the case depends on at least the allegations of the complaint and the type of claim(s) pled.  Whether to raise a lack of Article III standing after discovery has begun depends upon the facts learned, but be careful not to confuse a lack of standing argument with a summary judgment argument that actual damages are required and no such damages exist because the latter argument, if successful, results in a dismissal with prejudice whereas a lack of standing results in a dismissal without prejudice.