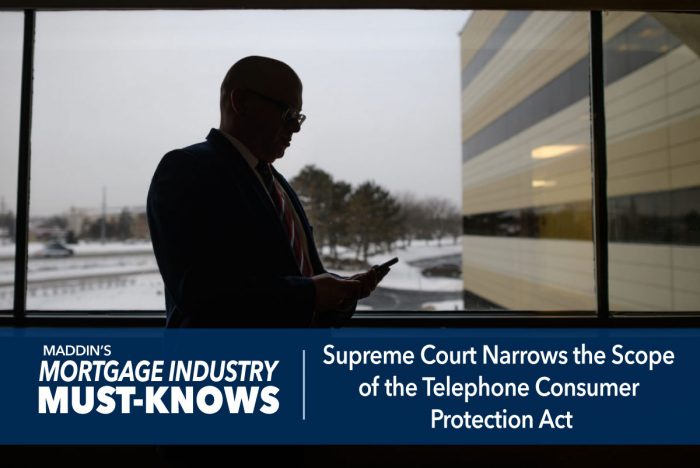 The United States Supreme Court significantly narrowed the scope of the Telephone Consumer Protection Act‘s (TCPA) restriction on automated calls to cellular phones last week in Facebook v Duguid. The TCPA, enacted in 1991, is a draconian federal statute aimed primarily at abusive telemarketing practices to residential and cellular telephones. It has ensnarled many businesses from all sectors of the economy in class action, individual and regulatory enforcement litigation resulting in multi-million dollar judgments and settlements over routine and necessary communications with their customers or perceived customers. Facebook, for example, was sued because it mistakenly sent Duguid several text messages alerting him that someone had attempted to access his Facebook account from an unknown browser — even though Duguid never had a Facebook account or gave Facebook his number.

Most TCPA lawsuits involve a provision prohibiting calls to a cellular phone using an “automatic telephone dialing system” (“ATDS”) without the prior consent of the recipient of the call.  47 U.S.C. §227(b)(1)(A).  Since the passage of the TCPA, despite dramatic changes in telemarketing technology, the definition of an ATDS has remained the same: “equipment which has the capacity — (A) to store or produce telephone numbers to be called, using a random or sequential number generator; and (B) to dial such numbers.”  47 U.S.C. §227(a)(1). The TCPA creates a private right of action for persons to sue to enjoin unlawful calls made by an ATDS and to recover up to $1,500 per call with no cap on the total amount of recoverable damages. §227(b)(3).

Although Facebook should decrease the number of TCPA suits filed under the ATDS provision, it does not mean companies should “fire up” their dialing equipment (e.g., predictive dialers) to make automated calls without consent. Consent still remains the best defense available under the TCPA and having consent protects both your brand and the relationship with the recipient of the call. The TCPA’s prohibition on artificial or prerecorded calls to a cellular phone without consent also still exist, in addition to the “Do Not Call” regulations. Now is not the time to decrease your efforts to ensure your outbound calls (and texts) comply with the TCPA. Now is the time (if not already done) to evaluate your (and your vendors’) dialing and texting equipment and platforms to determine how they stack up against the language in Facebook and the TCPA, in general.

The TCPA attorneys suing on behalf of the consumers are not going away without a fight. In new and existing lawsuits they will argue to lower courts that the term “capacity” remains undefined in the TCPA and, notwithstanding Facebook, liability exists under the TCPA if the defendant’s equipment has the “capacity” to be an ATDS even if that “capacity” was not used to contact the plaintiff. Even before Facebook, consumer organizations and consumer attorneys were lobbying Congress to amend the TCPA and creative plaintiff’s attorneys had begun filing claims under state law for the same calls alleged to violate the TCPA. Those pursuits will only intensify after Facebook. In the interim, it will be interesting to see how Congress and the FCC react to the Supreme Court’s decision.