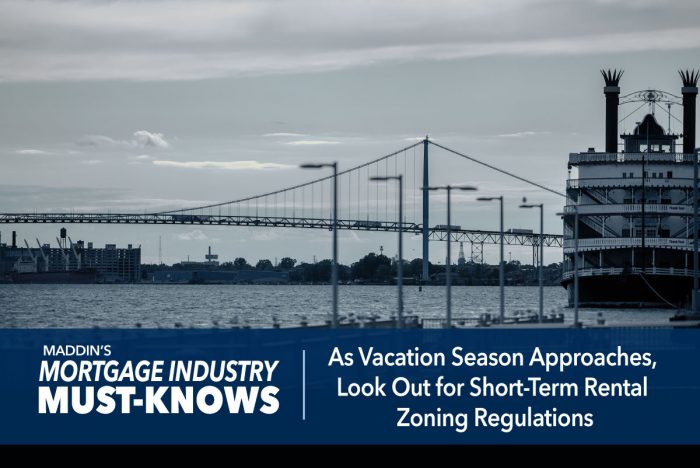 Many of us in chillier states are ready to plan vacations to warmer climates after a long winter, and a growing number will stay in short-term vacation rentals when they get to those warmer climates. Though we may be dreaming of our moments in the sun, these properties can lead to clashes with local governments that can turn into a nightmare for property owners and, by extension, their mortgage servicers.

Where there’s a clash between a city and vacation rental companies, it may seem like only a distant and insignificant problem for servicers. Industry insiders know, however, that these battles have the potential to affect anyone with an interest in the property.

For example, a recent article in the New York Times focused on a lawsuit filed against the City of Miami by Airbnb, alleging that the City’s zoning regulations are overly burdensome. Airbnb and other online vacation rental sites have been plagued with attempts by municipalities to keep residential areas free of their short-term guests, and as summer travel begins to heat up, these conflicts may reach a boiling point.

Certain areas of Miami have been targets of a crackdown by city compliance officers, who are ticketing property owners and vacationers who stay in short-term rentals offered by Airbnb and similar companies. The code violation officers have justified their actions by citing increasing numbers of complaints from residents about noise and trash left behind by short-term renters. Miami property-owners have been shocked by fines which reached new heights in recent years, with a city ordinance providing that property owners renting illegally are fined $20,000 for the first offense, with the fine increasing in $20,000 increments for every subsequent offense, up to $100,000 for some property owners, according to a recent Miami Herald article.

An October 2019 ruling by a Miami-Dade circuit court judge struck down those sky-high fines, but city officials have stated that they will continue to pursue owners of short-term rental properties who fail to properly register and license their properties in compliance with tax regulations. These statements indicate that cities like Miami are likely to continue their battle against short-term rentals by whatever means necessary.

While news coverage of the issue does not suggest that lienholders are subject to fines or these local ordinances, servicers and lenders should be aware that this situation could morph into the blight violation situations already seen in several cities. Fines of this magnitude also can create financial hardship for servicers. In these situations, cities expand their code violations to anyone that has an interest in the property in order to enforce the violations and/or ensure payment of fines. Servicers and lenders may be able to mitigate these situations by inspecting properties promptly and asserting non-monetary defaults if the properties are being used as short-term rentals. If the defaults are not cured, the servicer can consider foreclosure.