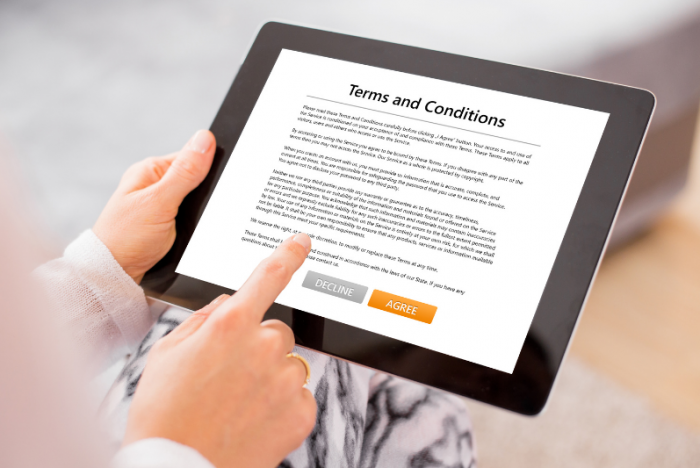 Businesses spend a lot of time sweating over the design and look of their websites. But while the focus may be on images and graphics and a smooth user experience, the appearance of a website’s terms and conditions – their font, size, color, location, and interactive elements – make all the difference in whether such provisions will actually be binding and enforceable for consumers who visit the site.

A recent decision from the U.S. Court of Appeals for the Ninth Circuit illustrates the critical difference between “clickwrap” and “browsewrap” agreements on websites and how businesses that rely on the latter increase the likelihood that Courts won’t enforce their critical terms and conditions like agreements to arbitrate and prior express written consent under the Telephone Consumer Protection Act (TCPA). As the court held in Berman v. Freedom Financial Network LLC, unless such terms are “reasonably conspicuous” and a user demonstrates their “manifest unambiguous assent” to those terms, they will be void and unenforceable.

Courts have long held that the same principles governing contract formation “in real life” also apply to agreements formed online. This includes the requirement that parties manifest their mutual assent to the terms of the agreement before it can be enforceable. As the Berman court noted, “parties traditionally manifest assent by written or spoken word, but they can also do so through conduct.” Thus, “if a website offers contractual terms to those who use the site, and a user engages in conduct that manifests her acceptance of those terms, an enforceable agreement can be formed.”

Historically, website operators have used two primary ways to obtain assent from users. “Clickwrap” agreements are the most straightforward of the two, as they involve presenting users with specified contractual terms on a pop-up screen and requiring the user to click or check a box stating “I agree” in order to proceed. Because they involve affirmative conduct manifesting agreement, “courts have routinely found clickwrap agreements enforceable.”

“Browsewrap,” on the other hand, does not involve any affirmative act or conduct by the website user. Rather, this way of obtaining a user’s agreement involves terms only disclosed through a hyperlink the user does not need to click on or review before continuing to use the website. As the Berman court wrote, “[c]ourts are more reluctant to enforce browsewrap agreements because consumers are frequently left unaware that contractual terms were even offered, much less that continued use of the website will be deemed to manifest acceptance of those terms.”

In Berman, three plaintiffs filed a class action lawsuit under the TCPA on behalf of consumers claiming they received unsolicited telephone calls and texts. The defendants moved to compel arbitration, arguing that the plaintiffs consented to arbitrate the claim by visiting a defendant’s website and “accepting” the hyperlinked terms and conditions that included an agreement to arbitrate.

On the websites at issue, sandwiched between much larger text boxes and other content, including a “continue” button, were two lines that read: “I understand and agree to the Terms & Conditions which includes mandatory arbitration and Privacy Policy.” While the phrases “Terms & Conditions” and “Privacy Policy” were hyperlinks, they appeared in the same gray font as the rest of the sentence, rather than in blue as is typically used to designate hyperlinks. (Images of the website pages at issue can be seen in Appendix A of the Berman opinion).

If a consumer clicked on the “Terms & Conditions” hyperlink, they would be taken to a separate webpage displaying a lengthy set of legal provisions, including the arbitration agreement. Additionally, the website did not inform users that clicking the large “This is correct, Continue!” button below the terms and conditions meant they agreed to them.

Defendants argued that, by clicking on the “continue” button, the named plaintiffs had agreed to the hyperlinked terms and conditions, including the mandatory arbitration provision. The district court found that this did not constitute acceptance of the arbitration clause. It refused to compel arbitration, holding that the content and design of the web pages “did not conspicuously indicate to users that, by clicking on the ‘continue’ button, they were agreeing to [the website’s] terms and conditions.”

In affirming the decision of the district court, the Ninth Circuit outlined the legal framework for evaluating whether a browsewrap agreement can show a user’s meaningful assent to its terms. Unless a website operator can show that a consumer has actual knowledge of the agreement, an enforceable contract will arise from browsewrap only if both of these conditions are met:

In finding the defendant’s browsewrap agreement unenforceable, the court highlighted several problems with its design and appearance that demonstrated a lack of conspicuousness:

Regarding evidence of assent, the Ninth Circuit held that merely clicking a large green button stating “Continue” (next to the sentence “I understand and agree to the Terms & Conditions which includes mandatory arbitration”) did not manifest unambiguous assent because there was no indication of the “legal significance” of clicking the button.

TCPA is All About Consent, And Clickwrap Is a Better Way To Get Consent

Having the proper consent remains the best and cleanest defense to a TCPA claim. Companies often rely on their websites to obtain a consumer’s consent to contact them with technology regulated by the TCPA. The logical extension of the holding in Berman, however, means the defendants won’t be able to rely on the website’s terms and conditions to establish that consent. Having an appropriate and compliant clickwrap agreement with an agreement to arbitrate and a proper consent provision provides a much better chance of avoiding ruinous class action liability under the TCPA.