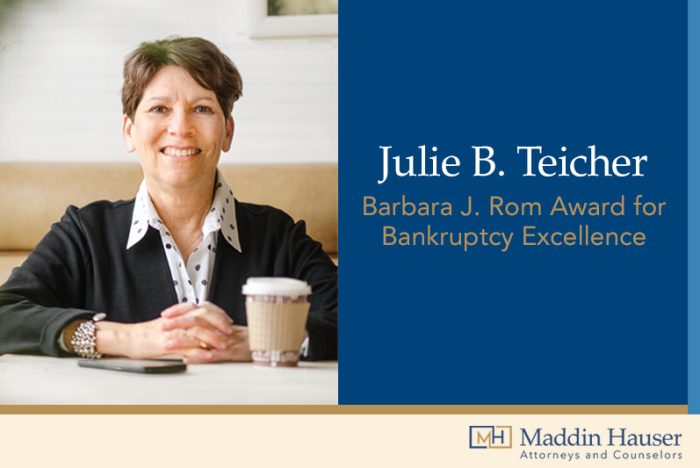 Maddin Hauser is thrilled to announce that shareholder Julie B. Teicher was selected as the 2022 recipient of the Barbara J. Rom Award for Bankruptcy Excellence from the Federal Bar Association of the Eastern District of Michigan. Chosen annually, the award winners must exhibit the highest overall excellence in the practice of bankruptcy law.

A most deserving award winner, Julie has devoted her practice to business-related insolvency and bankruptcy matters for 40 years. She tackles cases in U.S. Bankruptcy Court, U.S. District Court, and state courts, where she represents debtors, creditors, receivers, purchasers, and parties of interest.

Julie represents clients in bankruptcy cases in Michigan and other jurisdictions across the United States. Additionally, she serves as Michigan bankruptcy counsel for out-of-state lawyers who have cases in a Michigan federal, state, or bankruptcy court.

This latest honor for excellency in bankruptcy adds to Julie’s numerous other accolades. Michigan Lawyers Weekly also named her as a Woman of Influence in 2022. A Fellow of the American College of Bankruptcy, Julie has long been named a bankruptcy “Top Lawyer” by DBusiness Magazine and is ranked by Leading Lawyers, Best Lawyers in America, and Super Lawyers.