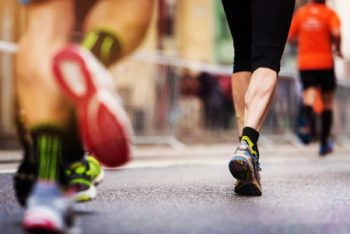 Life Lessons Learned Along the Way: Eight Seconds to Boston

“C’mon, Mr. Bear. Hop on!” I yelled as loudly as I could. 23 miles into the 2009 Detroit Free Press Marathon, I didn’t care all that much about what the runners around me thought. My quads were burning, my neck and shoulders had cramped, and I was mentally exhausted. At this stage of the race, I needed to be distracted and inspired.

If I could complete this race in less than 3 hours, 20 minutes, I would qualify for the next Boston Marathon. In order to meet this goal, I joined a pace group at the beginning of the race that ran as close as possible to the goal pace. We climbed up the Ambassador Bridge together, just as the first rays of sun started to warm the chilly October morning. We sped along the Canadian side of the Detroit River, treated to a spectacular view of the Detroit skyline. We descended for an “underwater mile” in the border tunnel that was closed to traffic for the race.

Unfortunately, I was unable to keep up by the time our pace group reached the 15 mile marker. Over the next 8 miles, I dropped further and further behind. By the end of mile 23, I was running 20 seconds per mile behind the target pace.

I still had one card left to play. At that time, the qualifying rules for the Boston Marathon only considered minutes, not seconds. A time of 3:20:59 would be as good as 3:20:00. The pace group was shooting for 3:20:00, which left me with a 59 second grace period.

Exactly how far behind the pace group had I fallen? It’s not easy to calculate minutes and seconds in your head, much less after running 23 miles. A check of my elapsed time and an approximation here and there allowed me to determine that I was one minute and one second behind the pace group. If I could run for the last three miles at the target pace, I could sneak in with a 3:20:59!

“C’mon, Mr. Bear.” The inspiration for this random shout came from the book Born to Run. Author Christopher McDougall quoted an elite marathon racer who surmised that every runner feels like they are carrying a bear on their back for the last 3 miles of the marathon. If even the professionals feel that way, there would be no excuses. I would leave everything I had on the course.

I changed my watch setting so that it only showed my current pace, and not elapsed time. The rest of the race, I wouldn’t worry about the last mile, or the next mile. My only focus would be to continue putting one step in front of another at a pace that I had practiced for months.

A side benefit to yelling at the top of my lungs in the middle of the race was that other runners glanced at me nervously. I already knew that I needed to ratchet up the intensity to get back to goal pace. Now, I had a second reason to speed up and pass the group around me – avoiding embarrassment.

I distracted myself by considering everyone who had helped me over the last year. I thought of how my wife had encouraged and supported me – from nutrition to sleeping patterns to watching the kids. When pain from the race would re-enter my consciousness, I would switch my attention to other people – my children, my co-runners, my colleagues at work. Step by step, block by block, I managed to get through the next mile. Lo and behold, when I hit mile 24, my watch informed me that I had finished that mile two seconds under race pace. I was less than twenty minutes from Boston.

I needed new distractions for mile 25. I rescued otherwise forgotten visions of my childhood. When my grandmother would visit us in California from New Orleans, she would bring a chocolate doberge cake from Gambino’s Bakery. It was a layered cake with frosting between each layer. Sometimes, it was lemon instead of chocolate. Wouldn’t that taste good right now?

The pain was breaking through more rapidly now. Random memories flashed and then disappeared from my mind. When I ran track in high school, we would run laps single file around the track – why am I running 26 miles, 200 yards used to be too far of a race – whoever was the last person in line would sprint to the front – I’m a sprinter, not a marathoner – after practice, my thin-as-a-rail teammate would eat 40 Chicken McNuggets – is this how he felt with a mile to go?

The Mile 25 marker receded into the background, heralding another milestone – another mile at goal pace. Now, I was less than ten minutes from Boston.

My energy was depleted; my mind had exhausted its mental tricks; my body was screaming at me to slow down. But the last mile – how glorious is it to say last mile – contained something new – crowds. Spectators lined the sides of the road, ringing cow bells, honking air horns, holding handmade signs. For my last mind trick, I imagined that they were all cheering for me.

When I worked downtown, I would walk all around the streets where the race ended. So, how come I don’t remember there ever being this cruel hill here, only a quarter mile from the finish?!?! The roar of the crowds increased. Keep pushing hard to the top. I could not disappoint the people cheering.

I glanced at my watch when I crested the hill, and completed the turn before the last straightaway. I can do it! I summoned everything I had and sprinted down the straightaway. It felt like I was passing other runners, surging with every cheer from the crowd. I crossed the finish line, knowing that I could finally allow myself to rest. I allowed the luxury of a smile to pass across my face.

With that final sprint, I probably cut a few additional seconds off my time. I figured that I had completed the race in around 3:20:50, maybe 3:20:55. I switched my watch setting back from current pace to elapsed time.

I stared at my watch. Something did not compute.

Eventually, I understood. I had not run 3:20:59. The official results listed my time as 3:21:07. I had missed my goal by eight seconds and had not qualified for Boston.

Oh, and one more important lesson learned. NEVER rely on complex mathematical calculations made after Mile 23.

When David is not exploring the streets and trails of Michigan, he can be reached at 248-827-1885 or dsaperstein@maddinhauser.com.