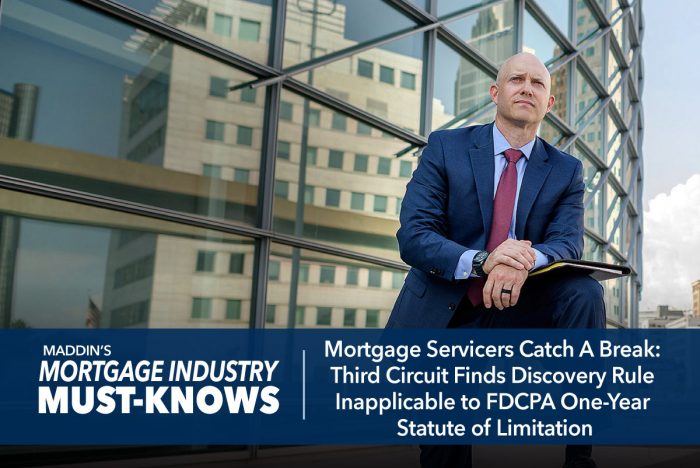 On May 15, 2018, the U.S. Court of Appeals for the Third Circuit ruled that the one-year statute of limitation applicable to Fair Debt Collection Practices Act (FDCPA) claims begins to run when the violation occurs, not when the plaintiff discovers the violation.  In Rotkiske v. Klemm & Associates, 2018 WL 2209120 (3rd Cir. May 15, 2018), Klemm sued Rotkiske in 2008 due to accumulated credit card debt.  After attempting service at an address where Rotkiske no longer lived, Klemm dismissed the suit voluntarily after being unable to effect proper service.  Id. at *1.  Klemm re-filed its suit in January 2009, and again attempted to serve Rotkiske at the address where he no longer lived.  Id.  This time, however, a third party signed for the complaint on Rotkiske’s behalf and Klemm obtained a default judgment.  Id.  Rotkiske discovered the judgment had been entered when he applied for a mortgage in September 2014.  Id.

On June 29, 2015, Rotkiske sued Klemm and other individuals for violations of the FDCPA.  Rotkiske, supra at *1. Defendants moved to dismiss Rotkiske’s claims on the grounds that the FDCPA’s one-year statute of limitation – 15 U.S.C. § 1692k(d) – had run.  Id.  By contrast, Rotkiske argued that the suit was timely because he only discovered the violations in September 2014 – less than a year before he filed his complaint.  Id.  The U.S. District Court for the Eastern District of Pennsylvania agreed with the defendants and dismissed the case.  Id.

On appeal, the Third Circuit affirmed the district court’s dismissal of Rotkiske’s FDCPA claims.  Rotkiske, supra at *4.  In so doing, the court rejected opinions from the Fourth and Ninth Circuits holding that the statute “begins to run not when the violation occurs, but when it is discovered.”  Id. at *1.  According to the Third Circuit, “the Act says what it means and means what it says: the statute of limitations runs from ‘the date on which the violation occurs.’”  Id. (quoting 15 U.S.C. § 1692k(d)).  In the opinion, the Third Circuit discussed the two primary models that Congress may use when commencing a limitations period:

We recently summarized the two basic models that a legislature may choose in fixing the start of a limitations period. First, a statute can run from the date the injury actually occurred, an approach known as the occurrence rule.  Alternatively, Congress may delay the start of the limitations period until the date the aggrieved party knew or should have known of the injury, that is, the discovery rule.  Id. at *2 (citations and internal quotations omitted).

Applying these models to the FDCPA, the court continued, “Congress’s explicit choice of an occurrence rule implicitly excludes a discovery rule.”  Id. at *3.  The Third Circuit concluded by holding: “actions alleging violations of the Fair Debt Collection Practices Act must be filed within one year from the date of the violation. Because Rotkiske’s action was filed well after that period expired, his action was untimely. We will affirm the judgment of the District Court.”  Id. at *4.  The court did reaffirm, however, that “our holding today does nothing to undermine the doctrine of equitable tolling.  Indeed, we have already recognized the availability of equitable tolling for civil suits alleging an FDCPA violation.”

In sum, the Third Circuit’s opinion represents a win for creditors in that, absent application of an equitable tolling doctrine, would-be plaintiffs cannot avoid the effect of the FDCPA’s one-year statute of limitation by claiming they had no knowledge of the purported violation.  Whether Rotkiske will seek review by the U.S. Supreme Court in an attempt to clarify the split between the Third Circuit on one hand, and the Fourth and Ninth Circuits on the other, remains to be seen.