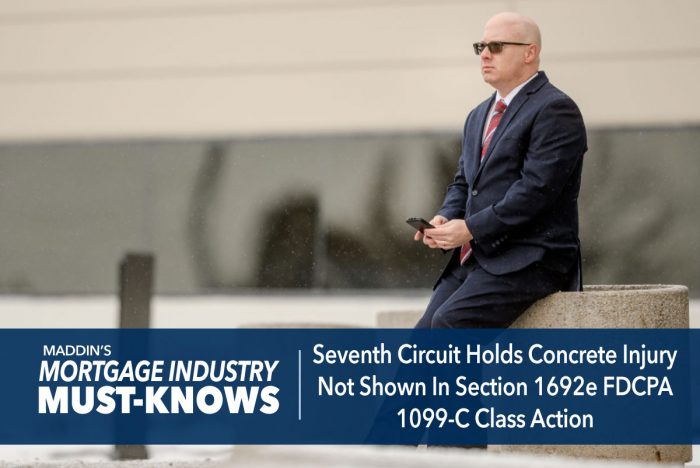 It is the holiday season, and Spokeo, Inc. v. Robins, 136 S. Ct. 1540 (2016), and its progeny keep giving back to the collections industry. The United States Court of Appeals for the Seventh Circuit (governing cases filed in districts courts in Illinois, Indiana, and Wisconsin) ruled today that a consumer trying to represent a class of consumers failed to allege a concrete injury in claiming a collection letter violated Section 1692e of the FDCPA by warning that if the creditor had to forgive more than $600, it would be required to report the release of indebtedness to the IRS. See Brunett v Convergent Outsourcing, Inc., No. 19-3256 (7th Cir. Dec. 15, 2020) http://media.ca7.uscourts.gov/cgi-bin/rssExec.pl?Submit=Display&Path=Y2020/D12-15/C:19-3256:J:Easterbrook:aut:T:fnOp:N:2630116:S:0.

The facts of the case are very straightforward. The consumer received a collection letter from a collection agency offering to resolve the creditor’s balance of $1,012. The letter warned the consumer that if the creditor had to forgive more than $600, the creditor would be required to report the release of the indebtedness to the IRS on a Schedule 1099-C. The consumer sued under the FDCPA, claiming the statement about reporting the release of indebtedness to the IRS violated Section 1692e(5) and (10), because it threatened action that could not legally be taken and was a false representation. The lower court granted the collection agency’s motion for summary judgment, finding that the FDCPA had not been violated. On appeal, the 7th Circuit addressed only standing, not the merits.

The 7th Circuit found no concrete injury under Article III of the United States Constitution. In doing so, the Court rejected that consumer confusion without an injury and the mere retention of counsel gives rise to an injury in fact. Regarding confusion, the Court held that “the state of confusion is not itself an injury.” The consumer was doomed by her failure to “tie that confusion to an injury”, whether it was paying something not owed or paying a debt with a lower interest rate when the money could have been used to pay a debt with a higher interest rate.

Having admitted at her deposition that the letter did not injure her (e.g., she made no payments, her credit rating remained the same, and no one was discouraged from doing business with her), the consumer was left to argue that hiring an attorney to sort through the confusion was a sufficient injury. The Court summarily rejected that concept, noting that each consumer who had lost Article III standing cases had retained counsel in those cases, and stating “[a] desire to obtain legal advice is not a reason for universal standing.”

Nor did it matter that the consumer claimed a violation of a substantive right under the FDCPA — Section 1692e — as opposed to a procedural right. The 7th Circuit rightfully relied on Thole v. U.S. Bank N.A., 140 S Ct. 1615 (2020), and its own decision issued yesterday, Larkin v. Finance System of Green Bay, Inc. No. 18-3582 (7th Cir. Dec 14, 2020), in declaring that a violation of a substantive right under a statute “does not guarantee the plaintiff’s standing” in the absence of an “injury in fact.”

In a desperate attempt to save the case, the consumer argued that she could still represent a class of consumers who were actually harmed. Wrong again. In the Seventh Circuit, the class representative must be injured (have standing herself) to represent the putative class. For that reason, the 7th Circuit affirmed the denial of the plaintiff’s motion to certify a class.

Because there was no standing, the 7th Circuit vacated the judgment in favor of the collection agency and remanded the case to the lower court with instructions to dismiss for lack of subject-matter jurisdiction.