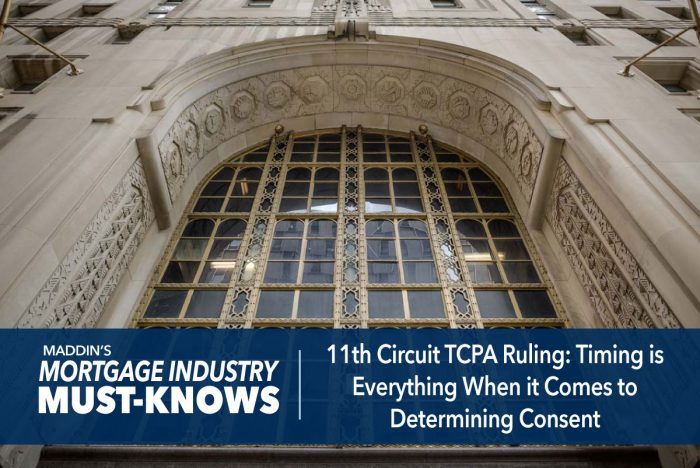 11th Circuit TCPA Ruling: Timing is Everything When it Comes to Determining Consent

Having the “prior express consent” of the party receiving the call remains the best defense in cases filed under the Telephone Consumer Protection Act (TCPA). Determining whether consent exists often requires an in-depth analysis of all communications (oral, written and electronic) with the recipient of the call to determine both the content and timing of each communication. A recent published decision from the U.S. Court of Appeals for the Eleventh Circuit affirming a grant of summary judgment to the caller based on consent confirms that “timing is everything” when it comes to deciphering consent under the TCPA. See Lucoff v. Navient Solutions, LLC et al., No. 19-134892 (December 4, 2020). Opinion https://media.ca11.uscourts.gov/opinions/pub/files/201913482.pdf.

The core facts were undisputed. Lucoff revoked consent in 2014 while on the phone with a representative from one of the defendants. While still on the phone with the defendant, but after the revocation of consent, Lucoff visited the defendant’s website to fill out an automatic debit agreement to make payments on his loan. As part of that process, he was invited to and did, in fact, update his contact information. The form that appeared already had some of Lucoff’s information pre-populated, including his mobile phone number. That field was not required and Lucoff could have deleted the information. Above the “submit” button on the form was a disclosure that granted the defendant consent to contact Lucoff on his mobile phone using an ATDS. Calls were subsequently made to the mobile phone and Lucoff sued under the TCPA, claiming he revoked consent while on the phone with a defendant. The District Court disagreed, granting defendants’ motion for summary judgment, which Lucoff appealed.

The main issue on appeal was whether Lucoff’s submission of the form gave defendants consent to call the mobile phone. Lucoff argued that it did not because he did not re-consent to being contacted because the form was submitted directly after his conversation with the defendant’s representative where the consent was revoked and because the language in the disclosure was misleading and deceptive. He argued the defendants should have known that he did not intend to re-consent “so soon” after speaking with a defendant on the phone. The 11th Circuit disagreed, ruling that timing was everything in this case: “While it is true that Lucoff filled out the demographic form just moments after he orally revoked his prior consent, Lucoff cites no authority that this temporal proximity should require this Court to consider the separate interactions (of revoking consent and later reconsenting) as one lumped together interaction.” See Opinion, p. 12.

For callers which either question the viability of this reasoning outside the 11th Circuit, or adopt a more conservative approach to handling consent in situations with arguably conflicting evidence of consent, one option to consider is contacting the consumer in writing or electronically, or placing a manual (non-ATDS) call to a good contact number, including the mobile phone, solely to clarify the preference.