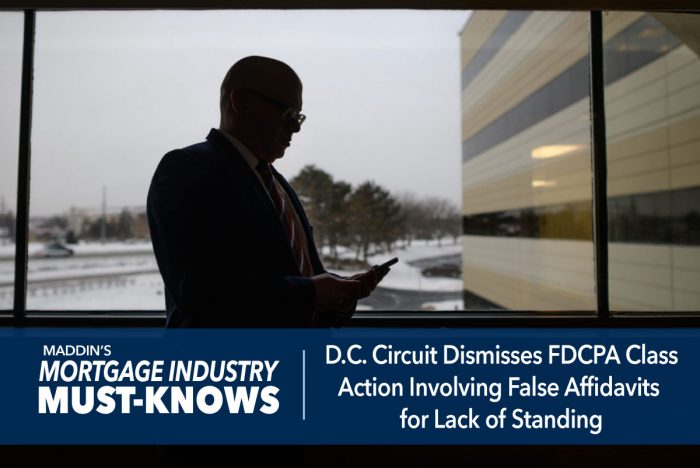 Jurisdiction is both tricky and sticky. That is the lesson from a recent decision from the United States Court of Appeals for the District of Columbia, Frank v Autovest, LLC, No. 19-7119 (June 9, 2020 ) (Opinion: https://cases.justia.com/federal/appellate-courts/cadc/19-7119/19-7119-2020-06-09.pdf?ts=1591714853), in which the Court dismissed a putative FDCPA class action involving fraudulent affidavits for lack of Article III standing instead of affirming the dismissal based on summary judgment. Why does the reason for the dismissal matter? Well, instead of a dismissal on the merits after years of litigation the standing dismissal could open the door for future state court litigation over the same claims depending on the standing requirements of applicable state law.

There is a lot to unpack with this decision. Regarding the law, remember that to have standing in federal court, Article III of the U.S. Constitution requires a concrete and particularized injury-in-fact traceable to the defendant’s conduct and redressable by a favorable judicial order. See Lujan v. Defs. of Wildlife, 504 U.S. 555, 560-61 (1992). And, as we have learned from Spokeo, its progeny and a recent decision from the United States Supreme Court (Thole v. U.S. Bank N.A., No. 17-1712, 2020 U.S. LEXIS 3030 (June 1, 2020), a violation of a federal statute does not automatically give rise to a concrete injury in federal court.

That dismissal naturally led to Frank filing her putative FDCPA class action against Autovest and the collection agency. Her action challenged the affidavits as violating Sections 1692e (false, deceptive or misleading representations), 1692(d) (harassing, oppressive or abusive conduct), and 1692(f) (unfair or unconscionable acts). In her deposition, Frank admitted that the false affidavits had no effect whatsoever on her response to the debt or the collection lawsuit. In dismissing the case on summary judgment, the district court relied on that deposition testimony in ruling that the false statements were immaterial (i.e., had no effect on Frank’s ability to respond or to dispute the debt). The district court did not address standing. Frank appealed.

First, the Court correctly considered this a factual not a facial attack on standing. In other words, the issue before the Court was not whether Frank alleged the elements of Article III standing in the complaint (think motion to dismiss for failure to state a claim standard). He had. The Court had to decide whether Frank countered the deposition testimony with factual support of a concrete injury (think summary judgment phase). She could not, according to the D.C. Circuit.

Second, although Frank’s reaction (the subjective reaction) to the affidavits was not relevant to the merits because only the unsophisticated/least sophisticated consumer’s reaction (objective reaction) matters, it was relevant to a factual attack on standing. As the Court noted: “ [a]fter Spokeo, a plaintiff must demonstrate a subjective- that is, personal injury for standing even when his merits argument turns on the perspective of an objective, unsophisticated consumer.” Frank, p. 9.

Once the district court dismisses the case after remand, the question arises whether the litigation is truly over. As most practitioners noted after Spokeo, the defendant which successfully raises Spokeo in federal court may find itself litigating the same claims with the same plaintiff in state court. Depending on applicable state law, Frank may be able to sustain a new lawsuit in state court and removal could prove difficult given the D.C. Circuit’s finding of no Article III jurisdiction.

Frank offers some good lessons. First, it reminds us that a Court can raise a lack of jurisdiction on its own and at any time. As defense counsel, we must analyze jurisdiction not only at the beginning of the case (before responding to the complaint), but throughout discovery as well. Regarding an Article III standing argument, the analysis should include the likelihood of success of that argument in any eventual state court litigation and a comparison of the known Judge in federal court versus the pool of Judges in state court. All decisions on jurisdiction (i.e., whether to challenge or not) should be made after consulting the client and be confirmed in writing. Second, it reinforces the importance of deposing the plaintiff and asking about how she responded (or did not respond) to the challenged collection attempt even though it is immaterial to the merits. Lastly, it is another significant decision confirming that Article III standing in a FDCPA case, even one involving false affidavits presented to a state court, requires showing more than a violation of the statute.