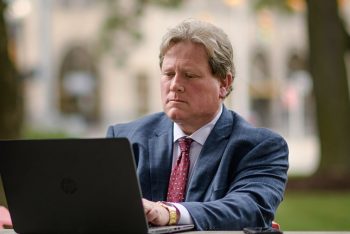 Life Lessons Learned Along the Way: Over the River and Under the Overpass

It is about a 10-hour drive from Michigan to Charlotte, North Carolina, where my aunt and uncle live. We could have flown like normal people, but I thought this way would be better. It was just my daughter and me. This would be a bonding experience, a road trip. It would be a blast. She was less confident about that than I was.

I was also somewhat encouraged by the fact that she had gotten her driver’s license and had been on Michigan’s wild roads for a little bit now. Clearly, she could handle some of the driving, which would give me a break. Of course, that would require me relinquishing the steering wheel – something I was more willing to talk about doing than actually do. Nonetheless, it instilled me with an additional sense of confidence.

The day before we were to depart, I was doing some work around the house. I had noticed an issue that required me to get up on the roof, at least the lower part, in order to provide the fix. I had done this before and had absolutely no fear. Besides, that lower part was not very high. (Note: Sometimes it is unnecessary to play on the roof. Nobody will think any less of you for not doing so.) As I reached for a hammer, I slipped just a little. I caught myself, but twisted my ankle ever so nicely. I managed to get back to the ground where my loving wife was waiting to chastise me for being such an idiot.

“Look honey. It’s not broken. I can wiggle my toes. Everything will be just fine.”

It kind of was. As the day wore on, it stiffened up, but I did not need to see a doctor. I knew I would be okay. I rested it that evening and took good care of myself.

The next morning my daughter and I were to depart. I was feeling just fine. No problems. We got in the car and began driving. It was a beautiful sunny day and the first long stretch of road was very flat. As we continued driving into Virginia and West Virginia, that ankle really started to stiffen up on me. As I was aware when we set out, this stretch was not so flat. Maybe I was not so smart after all. I was, however, stubborn and insisted on continuing to drive. After a few hours and lighthearted banter with my teenage daughter, who was having the absolute blast I knew she would, it must have become apparent that the ankle wasn’t doing what I was telling it to do.

“Dad, let me drive for a while,” my daughter said.

Now, I fully intended to do that, but not at this point. I knew she could handle it, but I was in charge. I was still preparing her for driving in, well, difficult conditions. She had already shown herself to be a good driver. She took to heart my warnings that, no matter how careful you are on the road, assume everyone else is not. Yet, I was still preparing her, so I kept going.

“Dad, come on, you’re just being stubborn.” See above.

Finally, she said to me, “Dad, you taught me how to do this. Let me actually do it.”

At that point, if we were to keep going, my conscious mind knew she was right. I knew full well she could handle this. She was prepared. Letting go, however, was a different story. Finally, after a few more miles I surrendered to her. She drove the next lengthy distance perfectly and probably more safely than I would have at that point. My conscious mind knew that was exactly what would happen. I just had to get my subconscious to agree.

We arrived in North Carolina late in the day and enjoyed my aunt’s amazing home cooked dinner. A few days later, we turned around and drove back, this time with much less fanfare.

I think of this episode from time to time in the course of my business. We prepare for events we know are ahead of us. Sometimes we spend so much time preparing, in fact, that it can hinder actual doing. The big event arrives, and we feel there must be just one more thing to do. There must be. In the end, though, it is necessary to trust your preparation and act. I know my daughter was glad I finally did that. So was my ankle.