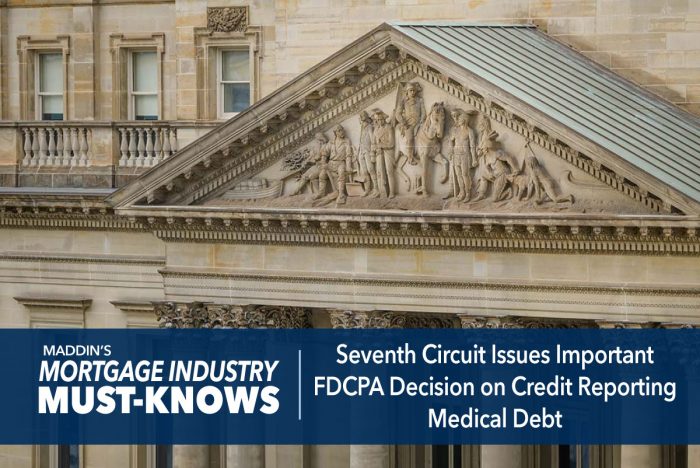 The Seventh Circuit held today that a debt collector does not commit an unfair or unconscionable act in violation of Section 1692f of the FDCPA by furnishing individual trade lines for separate medical transactions to credit bureaus instead of aggregating them together. See Zablocki et al. v. Merchants Credit Guide Co. (Opinion: http://media.ca7.uscourts.gov/cgi-bin/rssExec.pl?Submit=Display&Path=Y2020/D07-28/C:19-2045:J:Kanne:aut:T:fnOp:N:2553809:S:0).

Plaintiff Zablocki received multiple x-rays over a period of time. Merchants, a collection agency, sent the information to the credit bureaus as separate data entries for each x-ray instead of aggregating them together as essentially one trade-line. Zablocki claimed the separate entries created more leverage for collection by lowering the credit score and thus was an “unfair” or “unconscionable” act in violation of Section 1692f of the Fair Debt Collection Practices Act.

The District Court dismissed the claim on a motion to dismiss, holding it was not unfair or unconscionable. The Seventh Circuit affirmed. In affirming, the Seventh Circuit notes that 1692f should not be used an enforcement mechanism for other laws and nothing in the FDCPA specifically prohibits the practice of separately reporting serial debts owed to the same creditor. In holding that the conduct was not “unfair” or “unconscionable”, the Court relies on dictionary definitions of the terms “unfair” and “unconscionable” and finds the conduct does not equal an injustice, partiality, or deception:: “Viewing Merchants’ separate reporting of debts from the perspective of an unsophisticated but reasonable consumer, we see the alleged conduct as falling outside the scope of these terms. It is reasonable, and not at all deceptive or outrageous, for a collector to report individually debts that correspond to different charges, thereby communicating truthfully how much is owed on each debt. Some consumers may prefer to have their debts reported in a way that conceals debt-specific information, like how much is owed on individual debts, when specific debts were incurred, and which debts are stale . . . . But a preference does not necessarily equal an injustice, partiality, or deception.”