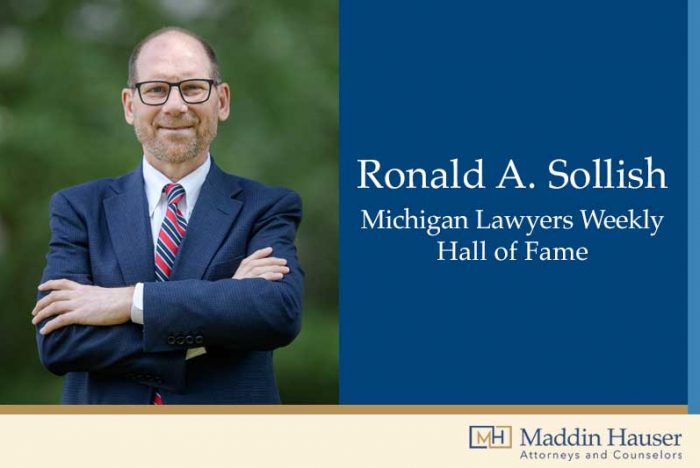 We are proud to announce that Michigan Lawyers Weekly has selected shareholder Ron Sollish for its 2022 “Hall of Fame” class. This honor recognizes the state’s legal leaders for their successful careers and valuable contributions to the community. These legendary lawyers have made their marks in the courtroom or the boardroom, in their law firms or legal departments, with community organizations, and within local, state, and national bar associations.

What Makes Ron Sollish a Hall of Fame Lawyer?

Ron’s legal career is a model for attorneys throughout Michigan and beyond. In the employment area, he has counseled owners, managers, and human resources professionals at companies across the U.S., to evaluate and develop successful strategies to mitigate risk and achieve goals.

As a consummate business attorney, he has negotiated and closed complicated commercial transactions and real estate deals, and protected clients’ interests in state and federal litigation, arbitration, and mediation.

As a leader with Maddin Hauser, he has driven the firm’s recruiting efforts, contributed to its growth, and helped steer the organization through the pandemic.

As a conscientious, community-oriented individual, he has given his valuable time and talents to various groups, effecting meaningful change for people in need.

In the Practice of Law

Highly regarded for his employment law experience and acumen, Ron’s clients know him as their trusted legal and business advisor who also provides counsel in real estate, partnership, finance, corporate, and business law and is a liaison to colleagues in other disciplines. Many clients have worked with Ron since he joined the firm after law school 34 years ago.

The public seldom sees the successes Ron delivers to his clients as they are often unseen—quiet negotiation of executive severance agreements, confidential settlements of disputes, and under-the-radar purchases and sales of companies and properties. Other successes are, however, noteworthy and high profile, such as helping to resurrect one of Detroit’s historic buildings into a premier hotel, rescuing an auto supply company by acquiring another vendor in bankruptcy to sustain production and keep the supply chain intact, or assembling 300 parcels into what will be a significant development project.

Personable and approachable, Ron enjoys people and primarily views the law as a collaborative process, even in litigation. But he won’t back down from a fight or stop short of going the distance for a client. One of his proudest wins involved a highly contentious dispute over non-competition agreements. Ron represented the employer, and the parties were in court every week for many months. Ultimately, Ron prevailed and obtained a judgment against the plaintiffs and pursued them into bankruptcy.

Ron has presented educational programs to business owners, human resources managers, and others—clients and non-clients alike—to increase the public’s knowledge and awareness of critical legal issues. Well-known and highly attended, these presentations have provided timely and valuable updates to assist audiences with employment and business decisions, and strategies to mitigate risk.

Always generous, Ron also uses these opportunities to showcase his talented Maddin Hauser colleagues, and demonstrate the firm’s prowess and bench strength. Through Ron’s leadership, the firm’s Corporate and Employment Practice Group has hosted their popular annual Employment Law Symposium and monthly Breakfast Bites Series for several years, and he has also spoken to industry associations and civic groups such as the Michigan Chamber of Commerce, the Michigan Association of Certified Public Accountants, the American Society for Industrial Security, and others.

Ron’s devotion to Maddin Hauser is endless. A shareholder at the firm, he also serves as vice president, an executive committee member, and chair of the Corporate and Employment Practice Group. During his 30-plus year career—all of which he has spent at Maddin Hauser, he has participated in or spearheaded the recruitment of new attorneys to guarantee the firm’s growth and welcome the next generation of lawyers and leaders. Beyond interviews and on-campus visits, however, Ron has partnered with law schools to develop programs, host seminars, and lead roundtable discussions designed to prepare law students for the actual practice of law and what to expect from their careers, regardless of the paths they take.

Because of his expertise in employment law and his leadership role on Maddin Hauser’s Executive Committee, Ron has played an especially critical role during the pandemic. As COVID-19 surged, he rapidly responded to new challenges that seemed to arise each day. Closely monitoring ever-changing executive orders and guidance from officials and agencies, he helped institute work-from-home and return-to-work protocols that not only maintained Maddin Hauser’s superior client service and complied with government rules but also ensured everyone in the firm felt safe and protected. Ron’s hands-on leadership efforts and empathetic manner are a unique combination of traits that have placed him on a constant, positive trajectory of firm leadership.

Ron’s involvement in the community is not an extracurricular activity; it is an extension of his overall service mindset. Although an active member of the Oakland County Bar Association, State Bar of Michigan, American Bar Association, and Society for Human Resource Management, Ron dedicates substantial time to volunteer, counsel, and lead nonprofit and charitable organizations.

Ron’s commitment to service was present at the outset of his career. One of his first assignments as a new associate at Maddin Hauser was to review documents for Tamarack Camps and the Fresh Air Society, which provides residential camping experiences and outdoor educational programming to schoolchildren and adults. Ron then joined the board of directors in 1990 and served as its president from 2002 to 2005. During that time, he guided the nonprofit through strategic decisions that allowed it to grow its annual budget to roughly $5 million and its scholarship fund to $1 million.

Ron has also dedicated himself to the success of Starfish Family Services, an organization close to his heart. Starfish is a private, nonprofit agency that serves vulnerable children and families in Metro Detroit. It is a leading provider of early childhood development and parenting programs, children’s mental health services, afterschool programs, and emergency shelter for youth in crisis. As a board member since 2010 and board chair from 2013 to 2016, Ron guided Starfish to expand its footprint from western Wayne County into the City of Detroit, helped establish a $12 million “Cradle to Career” facility as part of the Marygrove Project on the site of the former Marygrove University, and has seen the annual budget increase to $45 million to offer services to more than 9,000 at-risk children and families each year.

Ron has also given back as a member of the Jewish Federation of Metropolitan Detroit’s Board of Governors since 2005, a past member and board vice-president for the Jewish Historical Society of Michigan from 2016 to 2020, and a past member and board chair for the Michigan Parkinson’s Foundation from 2007 to 2011. He has even mixed community service with his hobbies, such as fundraising for the Detroit Rugby Football Club to acquire a clubhouse (Ron played on the University of Michigan’s Big-10 champion rugby team in college) and riding with Team Alex to raise more than $2.5 million over 11 years in the Make a Wish Foundation’s annual 300 Mile Bike Ride. For all of Ron’s professional, civic, and charitable accomplishments, he is most proud of his family. He was married right after taking the July 1988 bar exam and joined Maddin Hauser a month later. He and his wife are incredibly proud of their three children, one of whom is in law school, another is earning a Ph.D., and the third is pursuing a master’s degree in environmental policy.