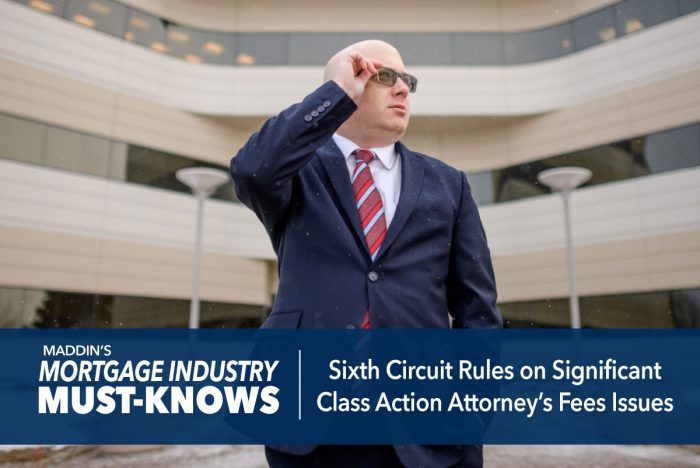 Class action defendants and practitioners in the Sixth Circuit will want to add today’s published decision by the United States Court of Appeals for the Sixth Circuit (governing Michigan, Ohio and Kentucky) in Linneman v. Vita-Mix Corp., 19-3993 (Opinion: www.opn.ca6.uscourts.gov/opinions.pdf/20a0255p-06.pdf) to their summer reading list.

The decision addresses whether: (i) the Class Action Fairness Act (CAFA) requires a district court to use the lodestar (hourly rate x hours worked ) or percentage (% of class member’s recovery) method when determining reasonable fees as part of a coupon settlement; (ii) class counsel can recover the attorney’s fees incurred while seeking attorney fees; (iii) the appropriate “market” for billing rates is local or national; (iv) Supreme Court precedent limiting the circumstances under which enhancement or multiplier fee awards can be awarded applies to class settlements in the absence of an underlying fee-shifting statute; (v) a district court should consider an offer of judgment for attorneys’ fees in determining reasonable fees; (vi) the district court must make specific findings concerning the value of the settlement in awarding reasonable attorney’s fees and what should be considered on remand; and (vii) post-judgment interest is allowed on an award of attorney’s authorized by a voluntary settlement agreement as opposed to a money judgment resulting from a decision on the merits.

There is a lot to unpack with this decision, so let’s start with the background. The class action suit against Vita-Mix Corp. was filed in the Southern District of Ohio and concerned an alleged defect with the company’s popular and high-priced blender. The parties agreed to a class settlement in which the consumer class would receive a $140 gift card and a replacement part; the commercial class received only the replacement part. The agreement, governed by Ohio law, authorized class counsel to seek attorney’s fees under FRCP Rule 23(h) and 54(d)(2), which provide for “reasonable” fees. Vita-Mix made a Rule 68 Offer of Judgment for $3.1 million in attorney’s fees, which Plaintiffs rejected. The district court ultimately awarded close to $4 million in fees, plus post-judgment interest on the fees, by using a lodestar approach that resulted in $2.2 million in fees and an enhancement award of 75%. Vita-Mix appealed the award of fees and an order allowing post-judgment interest on the fees.

The main issue in the case concerned Vita-Mix’s position that Section 28 U.S.C. § 1712 of CAFA required the district court to use the percentage method based on redemption rates to calculate attorney’s fees because class members were receiving a coupon (gift card) instead of cash. Section 1712(a) provides that in a coupon settlement “the portion of any attorney’s fee award to class counsel that is attributable to the award of the coupons shall be based on the value to class members of the coupons that are redeemed.” (Emphasis added.) The Sixth Circuit rejected Vita-Mix’s argument, which was based on a case from the 9th Circuit. It agreed with the 2nd, 7th and 8th Circuits that “attributable to” in § 1712 means the district court must have used the value of the coupons to calculate the fees. Id., p. 7. Because the district court did not use the value of the gift cards to calculate the fees, the redemption rates did not have to be considered and the use of the lodestar method was proper.

Although Vita-Mix lost those issues, it prevailed in its challenge to the reasonableness of the award of the fees. First, the district court abused its discretion by using the wrong hourly rates. Instead of using market rates within the local community, the district court determined the hourly rates by improperly taking the difference between national rates proposed by class counsel’s own affidavits and the community rates.

Second, the district court abused its discretion in entering a 75% fee enhancement award. The Court found that the Supreme Court’s rule in Perdue v KeneyA. Ex rel. Winn, 559 U.S. 542, 552 (2010), that enhancement awards are allowed only in “rare and exceptional” circumstances applies to a case involving a fee-shifting provision in a settlement agreement, in addition to a case brought under a fee-shifting statute. The Court held there was nothing “rare and exceptional” about this case in the record that justified a fee multiplier. Id., p. 16.

Third, the district court abused its discretion In not considering Vita-Mix’s $3.1 million Offer of Judgment. The Court held that “on remand, the district court should ask whether the $3.1 million was a reasonable (or frankly generous) fees award at the time Vita-Mix made the settlement offer. If it is, then the court should exclude any hours that class counsel worked after they rejected the settlement.” Id., , p. 17.

Fourth, the district court erred in not making any specific findings about the value of the class settlement when it awarded fees. The Court noted that the “degree of success obtained” remains “the most critical factor” in determining the reasonableness of a fee award. Id., p. 17. Although district courts are not required under CAFA to calculate attorney’s fees based on the percentage method in every coupon settlement, the Court stressed that “redemption rates should still play a crucial role in assessing the reasonableness of a fees award.” Id. The Court instructed the district court, on remand, to make specific findings regarding the value of the settlement and to consider the parties’ own evidence, including the coupon redemption rates and any pre-lawsuit measures Vita-Mix took to address the alleged defect. Regarding the latter evidence, the Court noted that offering consumers significant relief before a lawsuit is filed could substantially reduce the value obtained — and, therefore, the fee award — if the filing of the lawsuit “simply causes the defendant to switch from offering one form of relief to another of similar value.” Id., p. 18.

Linneman is an important and interesting case on many levels. First, defendants in the Sixth Circuit that settle class actions for coupons now have clarity regarding which method a district court may use in determining fees. Second, it is excellent authority to oppose a multiplier award. Third, it reinforces that when the parties have not/cannot agree upon an amount of attorney’s fees in a class action settlement, a properly negotiated and drafted class settlement agreement can limit certain aspects of the resulting fee award. Finally, strategically placed offers of judgment and pre-litigation remedies offered to consumers can also serve as useful tools in the toolbox to reduce a defendant’s ultimate exposure to attorney’s fees.