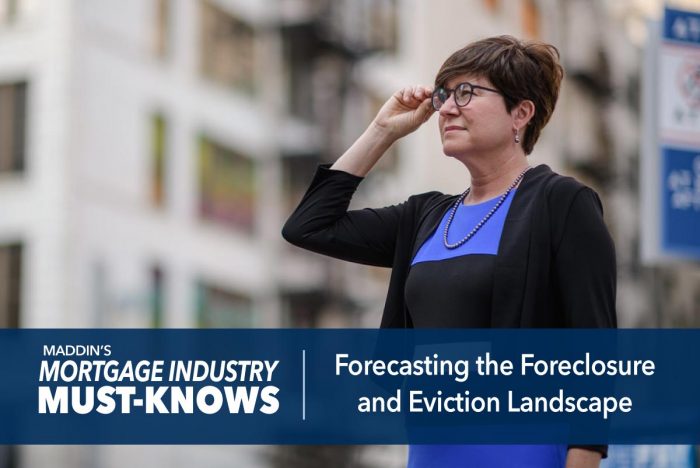 Forecasting the Foreclosure and Eviction Landscape

Every day brings a new event in today’s post-COVID-19 world, and foreclosures and evictions are no exception. On June 17, 2020, the Federal Housing Finance Agency (“FHFA”) extended its foreclosure and eviction moratorium for single-family home loans backed by Fannie Mae and Freddie Mac until at least August 31, 2020, and the Federal Housing Administration joined that extension. With that deadline quickly approaching, what can the industry expect to see next?

While we can’t predict the future, there are a few outcomes that seem to be the most likely to occur in the months to come. They each come with different challenges, but thoughtful preparation can help everyone in the industry get ready for the changing landscape ahead.

Option One: The Extension

The FHFA and FHA deadline could be extended again, possibly until the end of September. While this outcome may be the most probable, it only pushes the question slightly into the future. If the moratorium is extended past August 31st, the extra time can be put to work to prepare for the other likely outcomes described below.

Some states and cities are preparing for the possibility of the expiration of the foreclosure and eviction moratorium on August 31st by creating their own orders and policies, some of which have already resulted in Court intervention.

California’s Chief Justice recently indicated that the state’s current eviction moratorium could end as early as August 14, 2020, which sent lawmakers scrambling. Multiple bills are pending in the California State Assembly that would significantly limit foreclosures with a 180 day stay from the end of California’s declared emergency period, and would provide for significant restrictions on evictions, as well as landlords’ short-term ability to collect unpaid rent.

State actions vary widely, with Florida extending the moratorium on foreclosures and evictions to September 1st, but only in limited cases where the tenant or homeowner has been “adversely affected” by the pandemic. Someone is “adversely affected” if she or he sustains “loss of employment, diminished wages or business income or other monetary losses realized during the Florida State of Emergency.”

State and municipal regulations have been challenged in court with varying degrees of success thus far. San Francisco landlord groups have already been unsuccessful in a June 2020 lawsuit filed against the City, alleging that its ban on evictions is unconstitutional. In Massachusetts, a landlord group filed a lawsuit in federal court challenging Governor Baker’s pause on evictions through mid-October. Like the California lawsuit, the Massachusetts action contends that the Governor’s actions are an unlawful taking.

Given the level of variation between states and even between cities, the best course of action for industry players is to remain in close contact with their “boots on the ground” in various jurisdictions in order to stay abreast of rapidly changing developments and to assist in interpreting the ever-changing legal requirements.

In the absence of a centralized national strategy from the FHFA and FHA, we can expect to see a flood of foreclosure and eviction proceedings – likely in an uneven fashion around the country (see Option 2 above) — resulting from a regulatory vacuum.

Data provided by the New York Times indicates that between 30 and 40 million tenants risk losing their homes in the coming months, well beyond the previous annual rate of 3.7 million eviction filings. Courts will be inundated with foreclosure and eviction filings, which will lead to delays in processing both in those courts and in others as resources are diverted to handle the influx.

While proceeding with a foreclosure presently would not be popular for obvious social and humanitarian reasons, eventually investor pressure will mount to the point that some action to pursue delinquencies will be necessary. This is particularly likely since many loss mitigation options such as loan modifications and loan deferments are predicated upon borrowers being employed. Unfortunately, however, there appears to be a reasonable chance that the pandemic will result in higher than normal unemployment rates for quite some time, especially in hard hit industries such as restaurants and hospitality.

No matter which door we walk through in the post-moratorium environment, lenders and servicers must be prepared for a wave of loss mitigation requests as well as substantial delays in pushing foreclosure and eviction actions forward and should consider additional staffing now to handle the anticipated increase. Moreover, lenders and servicers would be wise to start working with borrowers now regarding non-forbearance loss mitigation options in an attempt to minimize the coming flood of loss mitigation requests.