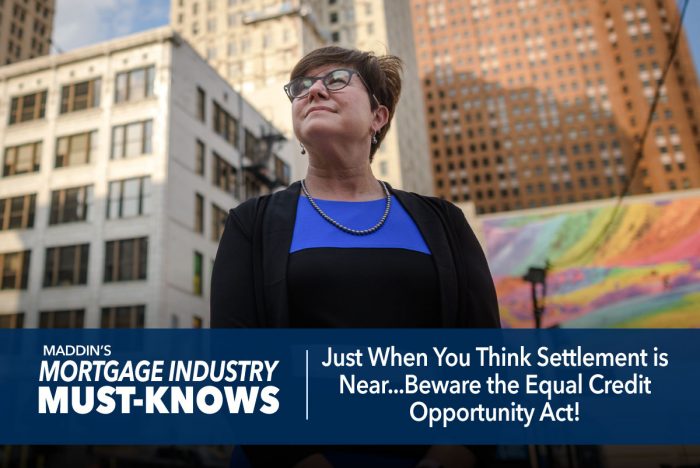 Just When You Think Settlement is Near…Beware the Equal Credit Opportunity Act!

When one thinks about the Equal Credit Opportunity Act (the “ECOA”) in the lending context, one immediately envisions consumer complaints related to discrimination on the basis of race, color, religion, national origin, sex, marital status or age in the mortgage origination process. However, ECOA on its face also prohibits discrimination against a borrower/applicant that has “exercised a right” under the Consumer Credit Protection Act in which TILA is found. In other words, ECOA may prohibit discrimination against a borrower for exercising a TILA claim.

Fortunately, “exercised rights” ECOA claims are defendable based on the definitions contained in the statute, particularly the definition of “discriminate against an applicant” which means “to treat an applicant less favorably than other applicants.” Discrimination is difficult for a borrower to prove in the context of a settlement proposal in a lawsuit given the fact that, unlike the origination process, there is not a readily identifiable pool of similarly situated applicants against which purported discrimination may be measured.

Although this blurb is based on a couple of anecdotal experiences and is not exhaustive, defense counsel in the mortgage industry should keep on the lookout for litigation settlement based ECOA claims and remember that what, at first blush may sound like a compelling theory from plaintiff, is likely a red herring.