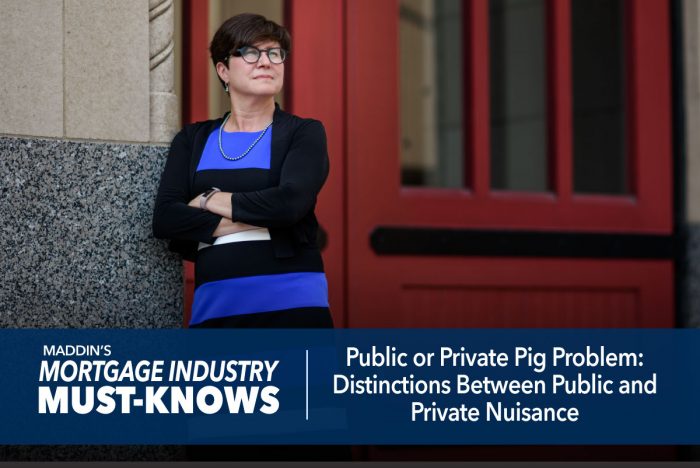 Thanks to pigs in Fraser Township, the Michigan Court of Appeals recently clarified public and private nuisances and the statute of limitations for a private nuisance claim.

In Township of Fraser v Haney, COA Case No. 337842, the plaintiff Township (the “Township”) brought a public nuisance claim against defendant property owners (the “Owners”) on the basis that their piggery created a public nuisance due to its stench.

The Appellate panel further discussed the distinction between actions in personam and actions in rem. Actions in personam are directed against a specific person and seek recovery of a personal judgment whereas actions in rem are directed against the thing or property itself, the object of which is to subject it directly to the power of the state. The Appellate panel noted that no Michigan Court has ever held that a claim seeking an abatement of a public nuisance constitutes an in rem action. Accordingly, it held that the instant action was actually an in personam action to abate a private nuisance, as opposed to a public nuisance claim, which was subject to a six year statute of limitations.

If you’re faced with defense of a nuisance action, remember that your case may turn on the distinction between a public and private nuisance.