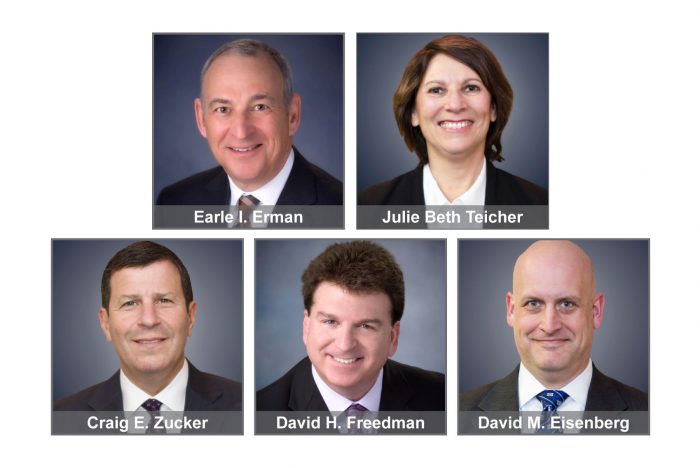 The announcement was made by the firm’s President and CEO, Steven D. Sallen. “This group of highly experienced professionals will expand our firm’s capabilities in providing responsive, cost-effective client solutions across multiple practice areas. We’re pleased to have attorneys of this caliber, with their expertise and reputation for providing sound client results, join our firm,” stated Sallen.

Earle I. Erman is a shareholder in the firm’s Creditor Rights, Bankruptcy and Insolvency Practice Group. Widely recognized as one of Michigan’s top bankruptcy and insolvency lawyers, Erman’s practice focuses on insolvency-related matters inside and outside of bankruptcy. He served as a member and bankruptcy trustee of the Panel of United States Trustees for the Eastern District of Michigan and has successfully handled a wide range of creditor-related matters, contract disputes, mediations, receiverships, representation of debtors, creditors’ committees, secured and unsecured creditors, and other parties in bankruptcy and non-bankruptcy matters. AV rated in Martindale Hubbell, Erman has been named in the Best Lawyers in America® since 1995 and has been recognized in the Michigan edition of Super Lawyers®. He is also board certified in Business Bankruptcy by the American Bankruptcy Board of Certification.

Julie Beth Teicher is a shareholder in the firm’s Creditor Rights, Bankruptcy and Insolvency Practice Group. Recognized for her expertise in insolvency-related matters, Teicher concentrates her practice on business-related insolvency and bankruptcy matters, handling cases in U.S. Bankruptcy Court, U.S. District Court and State court proceedings. A Certified Bankruptcy Court Mediator, she has served as an Adjunct Professor at University of Detroit/Mercy School of Law at various times since 2006 and has presented at numerous seminars. Teicher is AV rated in Martindale Hubbell and is included in its registry of preeminent women lawyers. Since 2010, she has been recognized in DBusiness Magazine’s Top Lawyers, named in the Best Lawyers in America®, and recognized in the Michigan edition of Super Lawyers®. Teicher has been recognized by Super Lawyers® as one of the Top Women Lawyers for Business Bankruptcy.

Craig E. Zucker is a shareholder in the firm’s Creditor Rights, Bankruptcy and Insolvency Practice Group who concentrates his practice in bankruptcy and insolvency-related matters. Zucker has a broad range of experience in representing debtors and creditors in federal, bankruptcy and state court proceedings, and through out-of-court workouts, mediations and facilitations. He is recognized for his successful representation of the interests of multi-employer fringe benefit funds, pension funds, health and welfare funds, unions, and retirees in various federal and bankruptcy court proceedings, including Chapter 7, Chapter 9 and Chapter 11 bankruptcies. AV rated in Martindale Hubbell, Zucker has been named in the Best Lawyers in America® since 2010 and has been recognized in DBusiness Magazine’s Top Lawyers.

David H. Freedman is a shareholder in the firm’s Corporate and Business, Real Estate and Creditor Rights, Bankruptcy and Insolvency Practice Groups. Widely recognized for his expertise in handling all phases of commercial transactions and his meticulous attention to detail, Freedman counsels clients on a wide variety of corporate, business and real estate matters, with an emphasis on transactional and contract work. Freedman’s practice includes all types of business and related transactions. He is also involved in a variety of debtor and creditor rights matters and regularly represents court-appointed receivers in state and federal court matters. AV rated in Martindale Hubbell, Freedman has been recognized in the Michigan edition of Super Lawyers® since 2010, named in DBusiness Magazine’s Top Lawyers in 2010, 2013, 2015 and 2018, and listed in Best Lawyers in America® since 2012.

David M. Eisenberg is an associate in the firm’s Creditor Rights, Bankruptcy and Insolvency Practice Group. He concentrates his practice in business-related insolvency, commercial litigation and collection matters in the U.S. Bankruptcy Court, U.S. District Court and in state court proceedings, as well as out of court loan modifications and workouts. As part of Eisenberg’s extensive experience, he has represented suppliers, contractors, and union fringe benefit funds in the construction industry and receivers appointed in matters instituted by the U.S. Securities and Exchange Commission. He engages in pro bono representation of bankruptcy debtors in non-dischargeability proceedings. Eisenberg has been recognized as a Michigan Super Lawyers® Rising Star from 2013-2015.